The story of my solo album “Michigan Christmas”

In 2004 I was invited for the second time to host a benefit for FNI (Field Neuroscience Institute) in my hometown of Saginaw, Michigan. It had been an honor to do it the first time and I wanted to somehow make the second performance stand out from the first.

The benefit was to occur in November so I came up with the idea of writing a holiday song for the event that I could dedicate to my hometown. I called it “Michigan Christmas” and it was a very simple, personal recollection of all the beautiful holidays I had spent with my family at home.

To make a long story short, I sang the song for the benefit that evening, and just like a scene from a movie, afterwards I was approached by a successful radio personality (also a family friend) in the area named Art Lewis. He came backstage and said, “Get me a recording of that song, and I’ll put it on the radio.” Having never heard such a proposition, I went back to NYC and excitedly did just that.

With the help from my good friend Dan Lipton, we recorded the first “single” version of Michigan Christmas and promptly sent it back to Art. In no time, I was receiving phone calls from family and friends saying that my song was on the air in time for the Christmas season.

With the success “Michigan Christmas” was receiving on the radio, I was emboldened to record my first album using that song as the cornerstone of the project. I did my own treatments of various classics like “White Christmas,” as well as wrote two more original songs for the album: the title track “From Christmas Eve to Christmas Morn” and “Santa Claus is Coming Tonight”).

It’s been an absolute thrill to receive comments and compliments from people all over the world communicating their response to THEIR own Michigan Christmas. For me, that’s the biggest and best gift all. 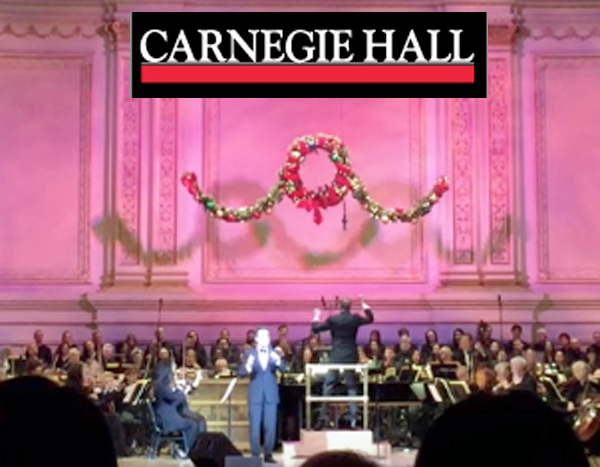 Performing “Michigan Christmas” at Carnegie Hall in 2015. (Click for video.)