“A magnetic Mr. James, in a role that finally makes full use of his heroic potential.”

From The New York Times, Ben Brantley review of “The Ferryman,” May 2019. Read the full review »

“Is Brian d’Arcy James the Busiest Actor in Hollywood?”

“James pulls drama double duty with ‘13 Reasons Why’ and ‘Unabomber’”

“It’s been a busy (and buzzy) year on television for veteran actor Brian d’Arcy James.”
—Profile in The New York Post

“He’s in 13 Reasons Why. He’s in Spotlight. He was a Hamilton star before it was cool. Now he’s back as King George—and still finds time to invite writers to run with him while he trains for a marathon.”

“As Nick Bottom, a guy who makes bad choices, Brian d’Arcy James makes all the right moves, sings with panache and tap dances, too. He’s a charmer who makes it look easy. When all is said and sung, James is something outstanding—the show’s living exclamation point.”

“James exerts himself into sheer lunacy — Nick is a striver following his dream, no matter how nutty it is.” 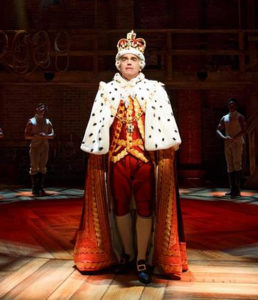 “There is also, pre-eminently and hilariously, King George III, played with vaudevillian brilliance by Brian d’Arcy James who sings snooty heartbreak ballads of rejection in the bouncy mode of Beatles-era Brit pop.”

“The brightest spotlight shines on King George III, divinely costumed and played with delicious wit by Brian d’Arcy James, whose forked tongue drips with venom for his wayward subjects.”

“One simply cannot neglect to mention Brian d’Arcy James, in a small series of bliss-out what-me-worry? interludes as the snooty King George, likely more hilarious than he’s ever been allowed to be on stage before.” 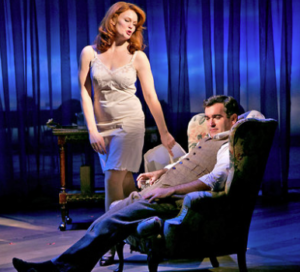 Kate Baldwin and Brian in GIANT

“Jordan Benedict (known as Bick and valiantly embodied by Brian d’Arcy James), a strapping cattle baron, returns to his immense Texas ranch from a visit to Virginia with a genteel, book-loving bride.”

“Star of the first order” (Huffington Post) in a “powerhouse performance” (NY1). 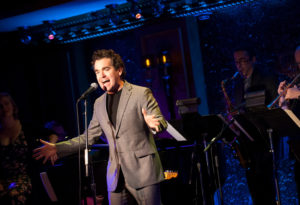 Solo concert at 54 Below

“Inside many male Broadway singers is a barely suppressed rock ’n’ roll wild man who dreams of exploding before thousands of screaming fans.  Brian d’Arcy James seized his opportunity to detonate on Tuesday evening at 54 Below, where he made his New York concert debut.”

“Perhaps the highlight is the classic Genesis tune “That’s All,” which closes the concert and gives James the opportunity to introduce his awesomely talented seven-piece band led by Dan Lipton on piano. Each member is just as much an asset as the lead singer; Damien Bassman and Greg Joseph provide solid backup on percussion; Paul Vercesi and Bob Millikan are expert horn players; and Erik Della Penna and Nicholas D’Amato are great guitarists.  If Brian d’Arcy James really does want to become a rock star we should welcome it with open arms.” 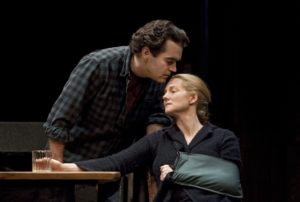 “Mr. d’Arcy James, a remarkably versatile actor equally at home in splashy musicals like ‘Shrek’ and the chiaroscuro delicacies of Conor McPherson’s ‘Port Authority,’ has never been better than he is here…  The darker feelings that reside just below his congenial surface — envy of Sarah’s career success, rage at a betrayal he at first chooses to ignore — eventually burst forth, in scenes to which Mr. d’Arcy James brings fierce, raw anger that sets the stage crackling with currents of powerful feeling.” 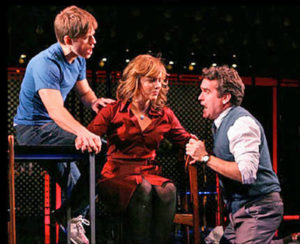 NEXT TO NORMAL, with Aaron Tveit, Alice Ripley, and Brian

Brian was interviewed by Iris Wiener of Improper Theatre about playing the role of Dan in NEXT TO NORMAL.

IW: “What is the most challenging aspect of playing Dan?”

James: “What I’m really curious about is the mixture of the complexity of his feelings of duty and responsibility, which are continually challenged by this illness that no one has a cure for.  I can only imagine what that’s like to live.  I have a sense of it from my own experiences and from reading and from research.  I think the most challenging aspect is to try to find all the positives and all of the negatives in the confusion of trying to assist in making things good.” 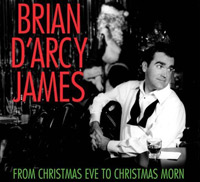 “One of the best albums of the year…a treat from start to finish.” 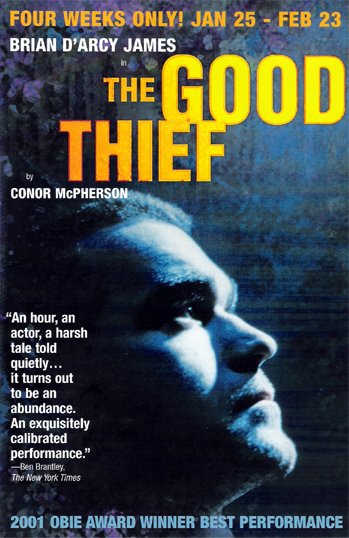 “Brian d’Arcy James…knows just how to perform the sleight of hand that’s required in an exquisitely calibrated performance. What’s described is ugly and violent; the description itself is hypnotically soft-spoken.  And from this contradiction there somehow emerges a glimpse of redeeming grace. … Mr. James, best known for his work in the musicals ‘Titanic’ and Andrew Lippa’s ‘Wild Party,’ is correspondingly sparing in his gestures, and when he smiles it’s so unexpected that it jolts. With hair cropped close and his body listing slightly, as if before a brisk wind, his natural leading-man handsomeness seems to have gone underground. He would look like nothing more than a garden-variety punk if his eyes weren’t so restless and questioning.  The performance exactly matches the understatement, indirection and contained tenseness of Mr. McPherson’s prose.”

“Brian d’Arcy James, best known for starring roles in Maury Yeston’s Titanic and Andrew Lippa’s The Wild Party, gives a winning performance.  He has an amazing gift for holding an audiences’ undivided attention. And his thick Irish accent is absolutely perfect.”

“Played with great charm by Brian d’Arcy James, the Dublin thug somehow manages to be extremely likable even as he describes some of the bad things he’s done.  James, best known for his musical roles in Titanic and MTC’s The Wild Party, possesses good looks and a commanding stage presence that helps woo the audience to his side. At the same time, his piercingly intense gaze and unshaven face suggest the dangerous edge needed to make the character believable.”

“James makes a most appealing low-life, his good looks not at all eclipsed by the five o’clock shadow he sports.  He’s a tough guy you can’t help but love and, ultimately and oddly enough, care about. James gets him just right, brogue and all. None of the character’s personality is permitted to overwhelm us: he can be alternatingly slick, violent and romantic, always with his sense of irony intact.” 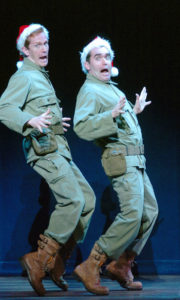 “Mr. d’Arcy James, who’s got more than a little Jolson in his soul, has a swell voice, and knows how to put across a tune of any vintage.”

“James croons … beautifully in a soft, rich baritone [as Bob Wallace]. He, too, brings down the house in a knockout first-act finale ‘Blue Skies’ in Bruce Pomahac’s wonderfully jazzy arrangement, a blissfully choreographed production number with an interwoven chase scene. James and Denman’s Phil Davis pair up pleasantly as the central song-and-dance team.”

“Vocally superb Brian d’Arcy James carries much of the score.”

“The most expanded aspect of the original story is the character of the hungry sycophant the columnist corrupts and ultimately destroys. This part is played with energy, intensity and clarity in a knock-out performance by Brian d’Arcy James. It comes as no surprise that James also sings the heck out of the part. His big number ‘At the Fountain’ is not only integral to the show, it is absolutely essential. It has all the musical and lyrical content to do its job. But add the ingredient of James’ thundering voice and it becomes a lynchpin of both the first and the second half of the show as it is reprised.”

“Brian d’Arcy James drives [the show] forward, unrelenting, inch by inch. Always the consummate musical theatre performer, his doomed press flack Sidney Falco is responsible for what emotional and musical impact the show has. Here, Brian d’Arcy James assumes the stature almost of a force of nature. The lust for the sweet life is right there on the surface and he plays it for all it’s worth in a performance that completely overpowers everyone else on stage.” 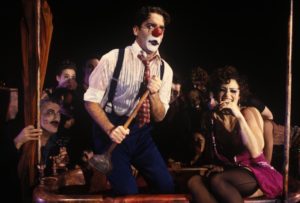 “The score is dominated by four principals: Brian d’Arcy James, Idina Menzel, and Taye Diggs are wonderful singers who leave nothing to be desired.”